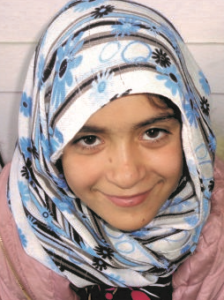 It was early 2017 when i met Yasamin the Jellybean now 13 years old-it was in a park in central Kabul-I was with a group of kids when she caught my eye on the outskirts of the park- I asked one of our assistants to go and speak with her and when I found out she was very poor and working on the mean streets of Kabul I asked if she’d like to join our group-she didn’t say-then one day not long after she turned up at our miraculous house and since we had another girl named Yasamin she became Jellybean which she duly embraced as a way for her to assume a new identity-we have a song called “Mother Mother” and when we played it she began to weep-when we asked her why, she said that she lost her mother when she was very young and the song reminded her of this deep loss-it is now one of her favorite songs that she sings with great aplomb in honor of her blessed mother and for all the other mothers who have endured poverty and war.

Registered before? Log in to use your saved details.

If you registered an account, please enter your details below to login. If this is your first time, proceed to the donation form.