“The time is always right to do what is right.”
~ MLK

The Miraculous Love Kids is a non-profit 501c3 whose aim is to teach the guitar to war-torn, poverty-stricken children, in particular young girls who have little to no rights and are often forced into marriage and face the most extreme forms of violence. We Concur with legendary Musician Charlie Haden who famously said, “Music in the hands of kids can save the world” and with that, we feel it is the most powerful way to give these kids a voice. Through the guitar, they learn English and about other cultures and countries. They also earn a stipend to support their families, which, in turn, instills in them self worth and hope for a better future.

Musician Lanny Cordola formed the Miraculous Love Kids around the premise that “it shouldn’t hurt to be a child.” That a kid with a melody in their heart has hope, and with hope all things are possible.

Since 2010, Lanny has followed the songline from Karachi to Kabul in his quest to help give a voice to kids living in poverty-stricken areas and war zones. He has collaborated with musicians from Slash, Gilby Clarke, Donovan Leitch, Mark McGrath, Gina Gershon and Sen Dog from Cypress Hill to renowned Pakistani singers Atif Aslam, Rahat Fateh Ali Khan, Sain Zahoor, Abida Parveen and Sanam Marvi — all with the aim of raising awareness, resources and funds for some of the poorest children in Pakistan and Afghanistan. In his travels, Lanny has had the good fortune to listen, learn, play for, jam with and teach many of these Miraculous Love Kids.

In 2014, Lanny and many of his esteemed musician friends staged PEACE JAM 2014, to aid a family Lanny befriended in Afghanistan “The funds we generated were used to provide for a family in Afghanistan who lost three family members to a suicide bombing including two young sisters Parwana and Khorshid,” Cordola says.

On June 27, 2015, thanks to supporters and American vet Brad Pupello (who was friends with Parwana and Khorshid), Lanny moved the family from a two-room slum in the hills of Kabul to a dignified three-bedroom home in a safe part of the city where Parwana and Korshid’s younger siblings — Behishta, Faisal and Mursal — are now going to a private school.

Funds raised at PEACE JAM 2015 will help sustain the family and others, but it’s an ongoing effort that requires continuous work. Your generous support and donations help with clean water, food, clothes, shelter, medicine, education, school supplies and musical instruments.

As part of Lanny & The MLK’s overall mission to bring the light of music to the underprivileged, Girl with a Guitar is a multi-cultural effort with a focus on girls’ education and womens’ rights by means of the guitar.

In June 2015, Lanny traveled to Kabul, Afghanistan, to inaugurate Girl with a Guitar, meeting many eager participants, and teaching a group of girls who have suffered many hardships and the loss of loved ones due to war and poverty.

Research shows that kids who learn music are healthier, happier and have higher brain function than kids who don’t learn music. In countries like Afghanistan, music has been badly neglected — and for girls in impoverished areas, virtually non-existent.

On his travels, Lanny hopes to introduce guitars to girls who aspire to learn and enhance their lives with the beauty and warmth of music, melody and compassion.

More recently, he has made music with renowned Pakistani singers Atif Aslam, Rahat Fateh Ali Khan, Sain Zahoor, Abida Parveen and Sanam Marvi on projects with the aim of raising awareness, resources and funds for some of the most vulnerable children in Pakistan and Afghanistan.

God Help Us All 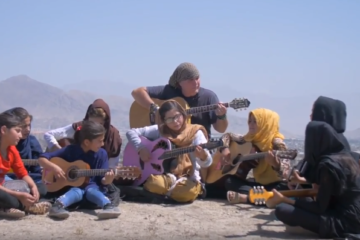 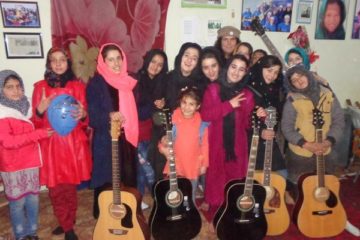