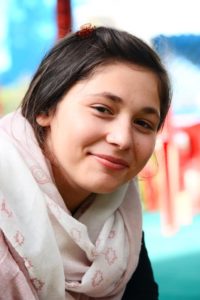 On September 8 2012 in Kabul,Afghanistan a then 8 year old Mursal along with her 11 year old sister Parwana and 14 year old sister Khorshid were attacked by a Taliban suicide bomber at the entrance to the International Security Assistance Force or ISAF ,the death toll was 7 including Mursal’s sisters,by a simple twist of fate Mursal was at the other end of ISAF when the explosion occurred and was physically unhurt.

When I met her on international women’s day March 8 2014 in Kabul she was 10. She was living with her family in Shuda on the outskirts of Kabul on the top of a hill in a very small home without running water or a bathroom. As I came to learn later her name means messenger, prophet, ambassador, one who is on a mission. Her father had recently left the family due to his drug addiction, joblessness and violent outbursts. I asked her mother what I could do and she said, please help my kids have a better future. This coming from a woman who had lost 6 of her 12 children to poverty, war, terror and other forms of extreme violence. I made the promise and returned in June of 2015. With the funds i raised in the US the family moved into their first secure home and Mursal and her brother and sister began studies in a private school. I also brought a guitar with me and Mursal’s eyes lit up. I asked if she’d like to learn how to play it. When she said,”Yes” our first “Girl with a Guitar” was born. Now at 14 she is the top guitar girl and  leader of over a hundred kids mostly girls learning music, english and other valuable life skills. Indeed, young Mursal is on a mission. And a testament to the immaculate power of Love and Music.

Registered before? Log in to use your saved details.

If you registered an account, please enter your details below to login. If this is your first time, proceed to the donation form.