FEATURED IN NEW “LOVE AND MERCY” MUSIC VIDEO WITH

THE MIRACULOUS LOVE KIDS / GIRL WITH A GUITAR

LANNY recalls the inspiration behind recording the song: “It was in our Miraculous House in Kabul, Afghanistan, when some of the girls began to teach me an Islamic saying, Bismillah Ir Rahman Ir Rahim, which means, ‘in the name of God, the all loving, the all merciful.’ I immediately thought of BRIAN WILSON’s sonic hymn ‘LOVE AND MERCY’ with its simple yet magisterial chorus — ‘Love and mercy is what you need tonight / So, love and mercy to you and your friends tonight.’”

“LOVE AND MERCY” first appeared on BRIAN WILSON’s 1988 self-titled solo debut. Calling it “the most spiritual song” he’s ever written, the singer is pleased to see the tune, 30 years later, resonate with a new generation in another, often misunderstood part of the world.

“I’m glad music makes the children feel love and mercy,” WILSON says. “That’s what music is all about — making you feel happy!”

LANNY adds, “BRIAN WILSON’s genius lies in his masterful blend of melody, words, sounds, and texture. It is that glorious, mystical gift that few possess. Music is one of the few art forms that can bring together girls and their guitars from a war-torn, poverty-stricken country like Afghanistan with a musical iconoclast like BRIAN WILSON for the highest form of connection — songs of justice that aim for transcendence.”

“LOVE AND MERCY” was co-produced by LANNY CORDOLA and GARY GRIFFIN. 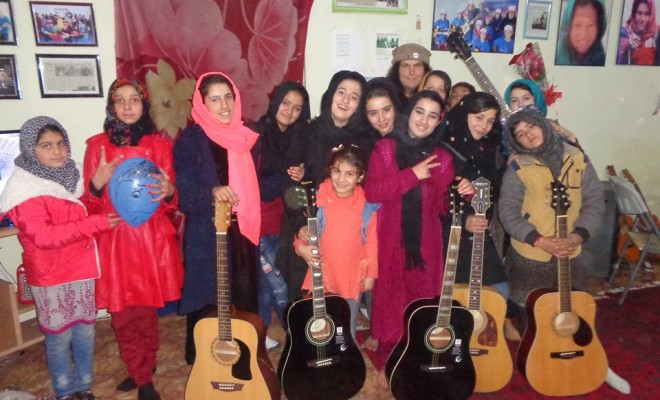 Girl With a Guitar (The Immaculate Love dream)